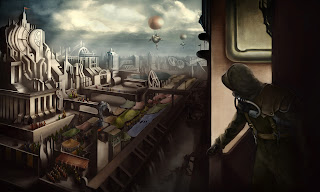 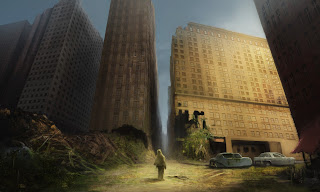 My idea for a traveler who lives underground but discovered an above ground world started as a short paragraph I wrote and showed to people. Starting out with words is helpful however, to really dive into my ideas I like to do paintings that support my written words. The piece above was the first I did for my idea and it propelled me into an imaginative abyss! from this point on thinking about designs and scenarios consumed me. This was that initial paragraph...

Underground life isn’t so rough. The rumors of life above are always
circulating. One underground creature, a curious one, knows what it is like.
He has seen it for himself. He found a way to get “above ground” and when he
goes up there he brings back trinkets and hides them in a box inside his living
quarters.

My idea deviated from this original paragraph and became less about a single character and more about an entire world full of stories. The piece below was my first idea for an above ground world that didn't include a thriving society.

Posted by iLLiVate at 2:27 PM No comments: