This piece was, somewhat, for a contest. It turned into more than that for me, I started become really obsessed with the lighting and overall look and feel. I haven't played World of Warcraft in a long time, I don't think I even played at all when Dranei were introduced(that I remember). 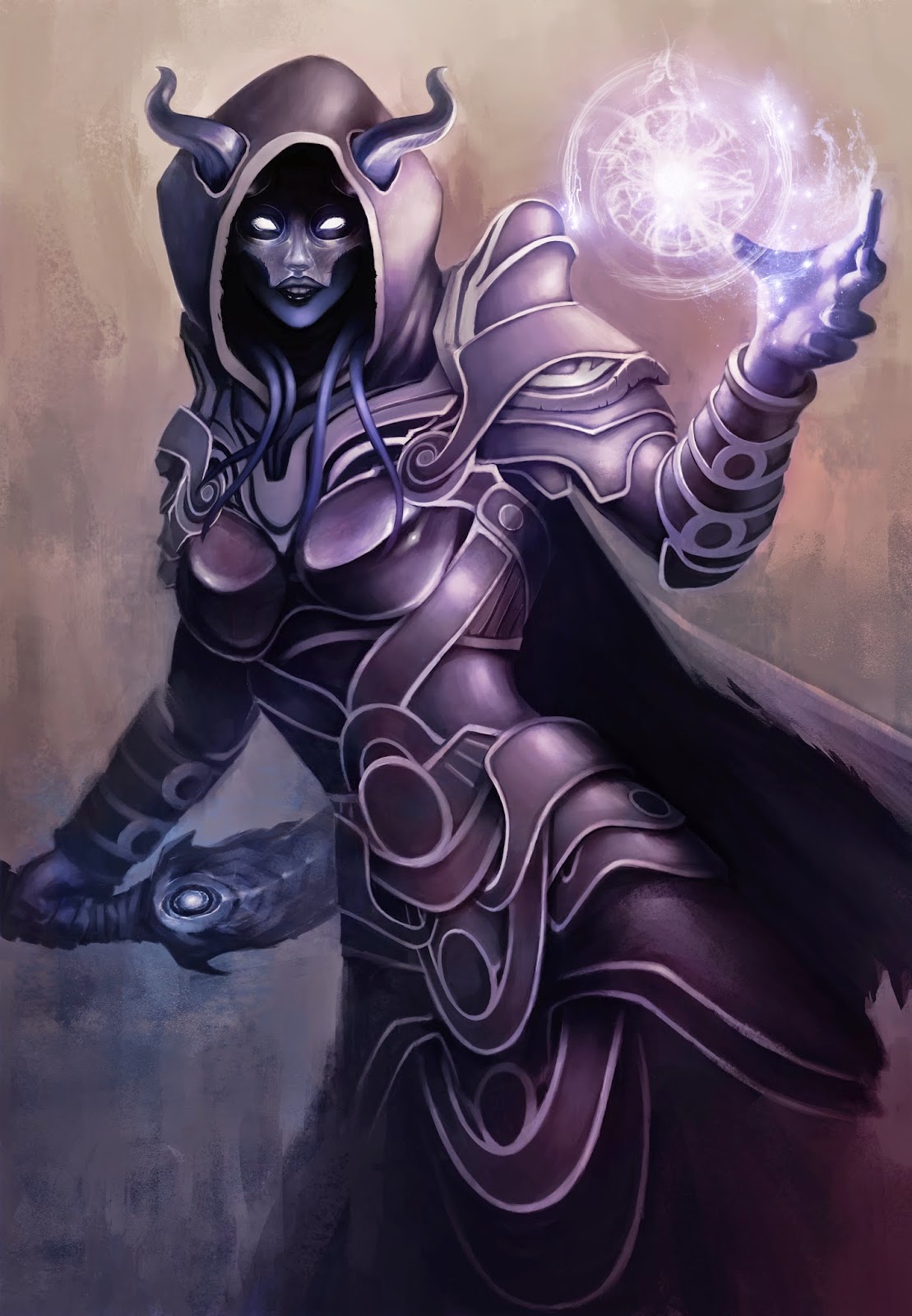 Posted by iLLiVate at 8:27 PM No comments:

So for my most recent professional work I had the awesome opportunity to design and render Temporary Tattoos. These tattoos will go into vending machines all over the country!! I owe a lot to a friend of mine for thinking of me for this opportunity. It was a blast to work with her and her team. Also, I just love that my work will be out there! on display and on the people who purchase them. I love that I found a venue outside of community of concept art and entertainment illustration to showcase my skills. My approach to the "Animal Kingdom" temporary tattoo line(the one I am most proud of) was that I think kids need new animal choices when it comes to temporary tattoos. While snakes, scorpions and tarantulas are great, I felt that it would be cool to see some red pandas, zebras, rhinos and elephants. Kids these days are more open and exposed to these animals and I think they should be able to show their love!

It's just cool, to me, to make a serious red panda and gorilla, so I included scaled up versions of those two tattoos. The other two lines were a series of watercolor tattoos and tattoos that looked like exposed skin with gears and cogs underneath. 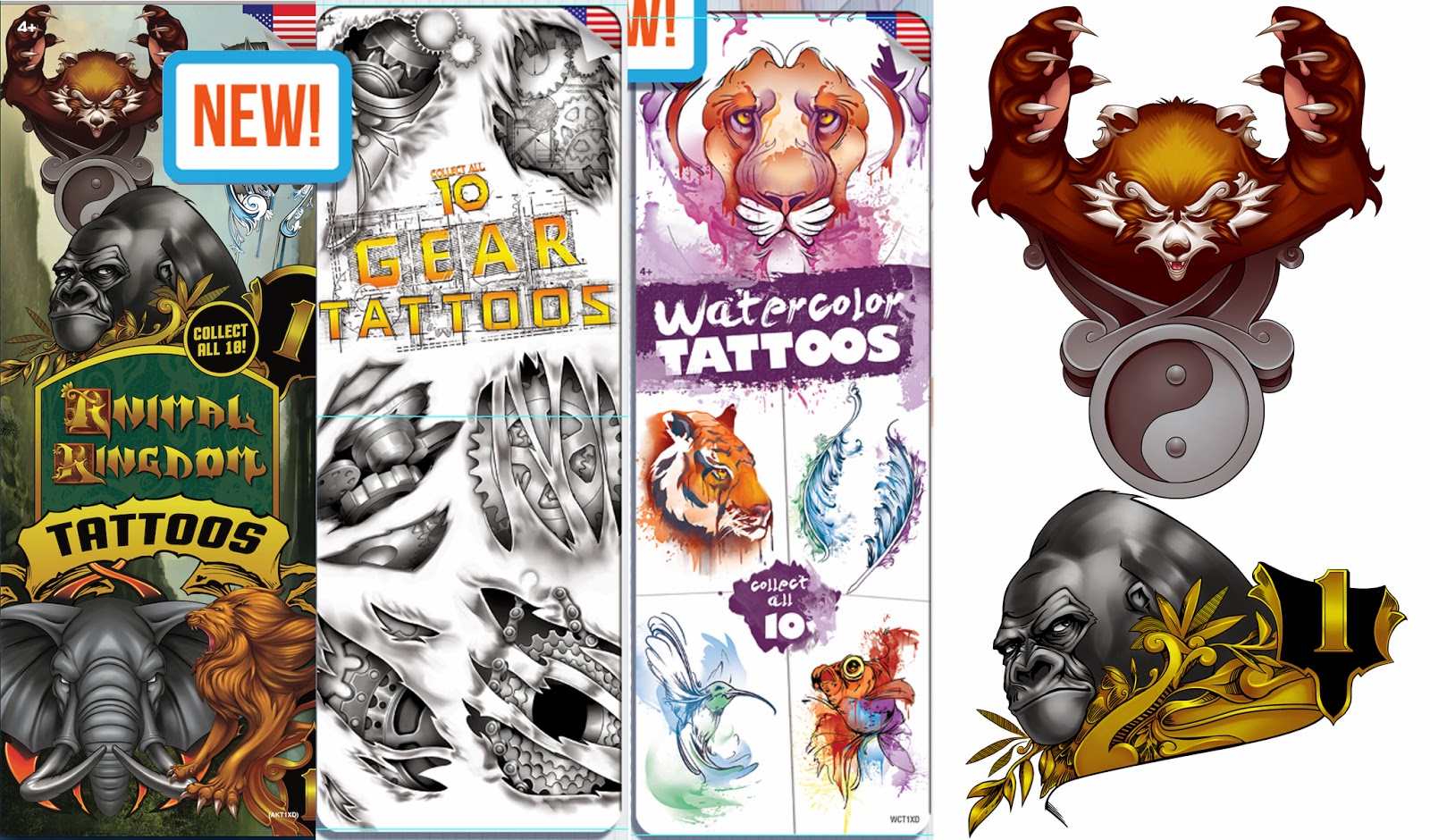 Posted by iLLiVate at 7:52 PM No comments:

Oatley Academy piece - This is where I stopped at before I started to get busy with freelance work. This was for the OA Audacious Accomplishment Assignment. The point of the assignment is to take an existing story or movie and make it your own and make it huge(or as huge as you can). I picked The Godfather. I studied the movie and found that at the heart of it was this sort of fear, or manipulation of fear. The character Michael Corleone based most of his decisions on the fear of losing, or displeasing his father. He wanted to make the decisions that would please his father, he was reluctant to get into his families business until the life of his father was at stake. His father (Vito) was dealing with a new kind of fear which was that heavy drug trade was starting to become a major source of revenue among his criminal colleagues. All the characters use fear to manipulate and force others to make decisions. The person bringing drugs into the country attacked Vito in an effort to manipulate his oldest son (Sonny) into giving money and protection necessary for him to bring drugs into the country. All these men use fear, when you don't do what they want you to do, they attack you in a way that scares you into doing what they wanted. Behind all the formal attire and class lies people who deal in fear.

I thought it would be interesting to set up some sort of story for game characters(card, video, or games) who were able to physically manifest, conjure and cast fear unto others. Since the concentration of the class more about making a piece that dealt with story rather than a piece that attended to mechanics of a specific format of gaming. It was less about designing a level, or card style illustration and more about finding a suitable arrangement of story ques that resinate a deeper meaning. I chose the part of The Godfather story where Michael was exiled to live in Cecily for a time. In my piece the character of Michael would be the horse rider who is forced to leave his home land. Behind him, his brothers, his nephew and men of his extended family.

There are parts of this painting I may tighten up in the future, but this is it as it stands right now. I may just pick a different scene from the movie to make my own, as this assignment was very fun and Chris Oatley has A LOT to offer in the way of instruction for reaching(and conveying) the deeper meaning of your work.

Posted by iLLiVate at 7:43 PM No comments:

I've found that it is best to just keep working. Even if it's kind of a slow time for me as far as work goes. It's best to keep working so that when you do get around somebody that is looking to hire/commission for some work, you have work to show them that they might have not seen from you, yet. So that they know your always going, always working and you have a passion for this. Here is a personal piece I did for fun, I wanted to experiment with ink-like strokes and also there was a potential commission coming up for someone who played Military First Person Shooters and was into skulls. So yeah, It's very popular thing. 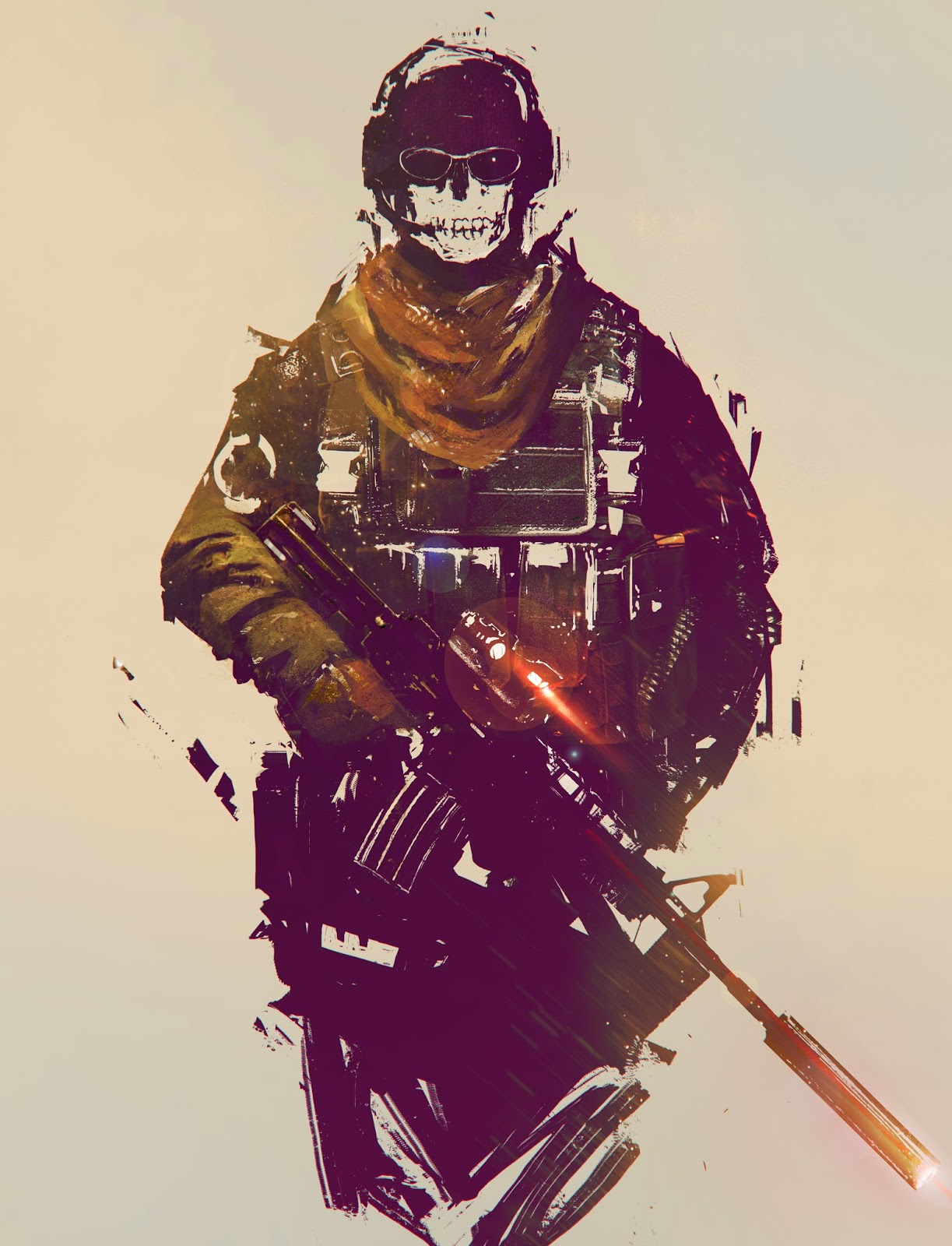 Posted by iLLiVate at 7:24 PM No comments:

So it has been a little while since my last post, not that I have been stagnant but I got some work that I had to attend to. I got freelanced out for some work I will post in a bit but first I thought I would post some studies I've done. I always do studies I just don't always post them because: 1) They don't always turn out well, even if I've learned something, the end product isn't always the prettiest. 2) I've always thought of studies as something person, for myself, so that I learn something. I know people do show studies, but I like to just keep doing them and not worry so much about posting them.

Here is an example of one study that I have mixed feelings about. The original image (top) is from a Sergio Leone movie title Once Upon A Time In America. It's a movie about Jewish mobsters during the times of Prohibition. As per Leone's usual, it carries that on-screen deliciousness. Well lit and well framed. So I did from the movie frame and then tried (below) to see if I could change up the lighting but still keep the same overall composition. 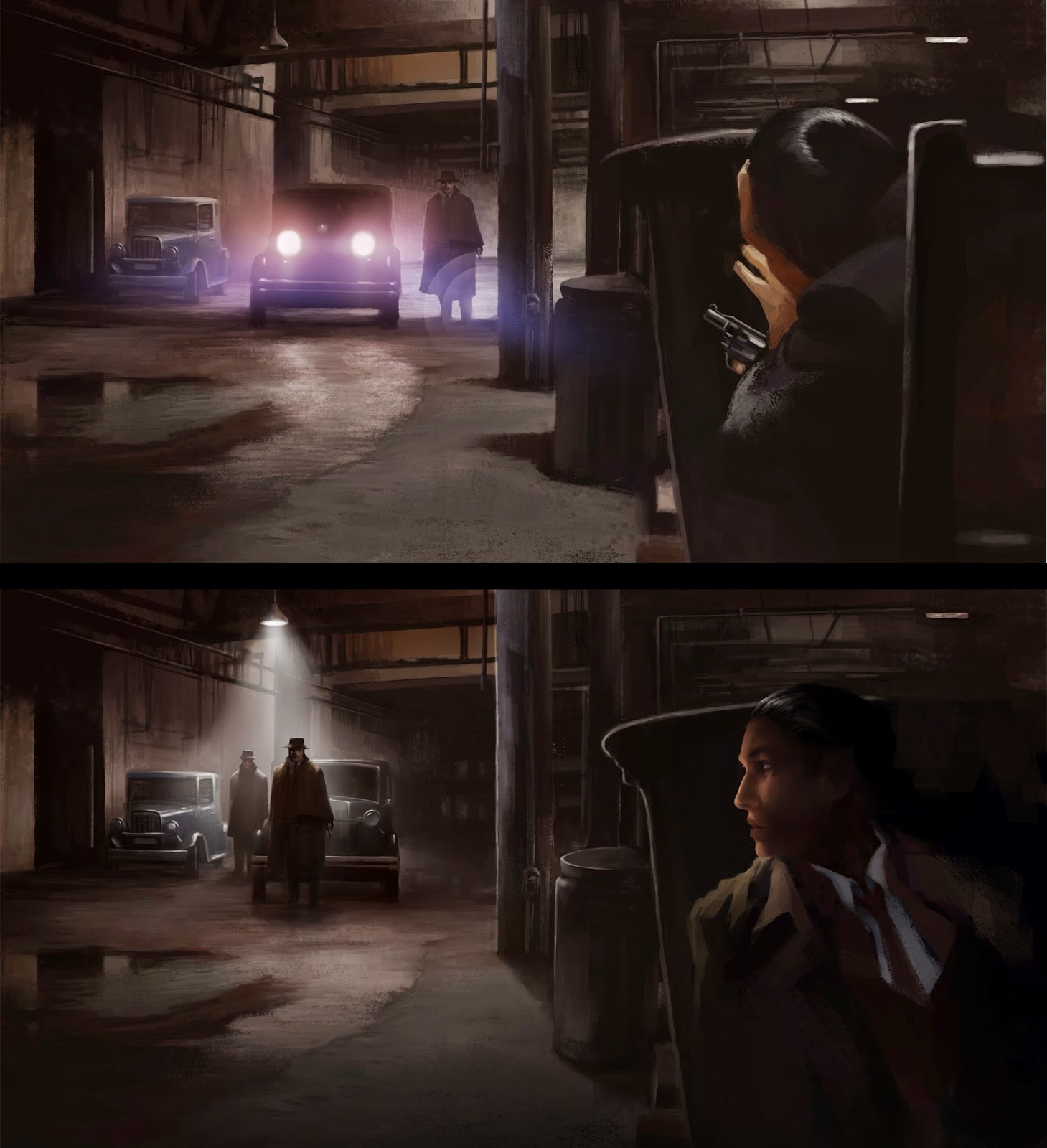 This is a side-by-side study I did of a rock that I found doing a google image search of "Grand Canyon rock formations." I picked this because I know what with the Grand Canyon I was going to get some rich orange, reds and some really cool violet hues. I love this combination, I love the violets and oranges that you see. Love it!! I have to visit there so I can do traditional studies. Also, a concentration here, was the swooping shapes of the rocks. Cool stuff. 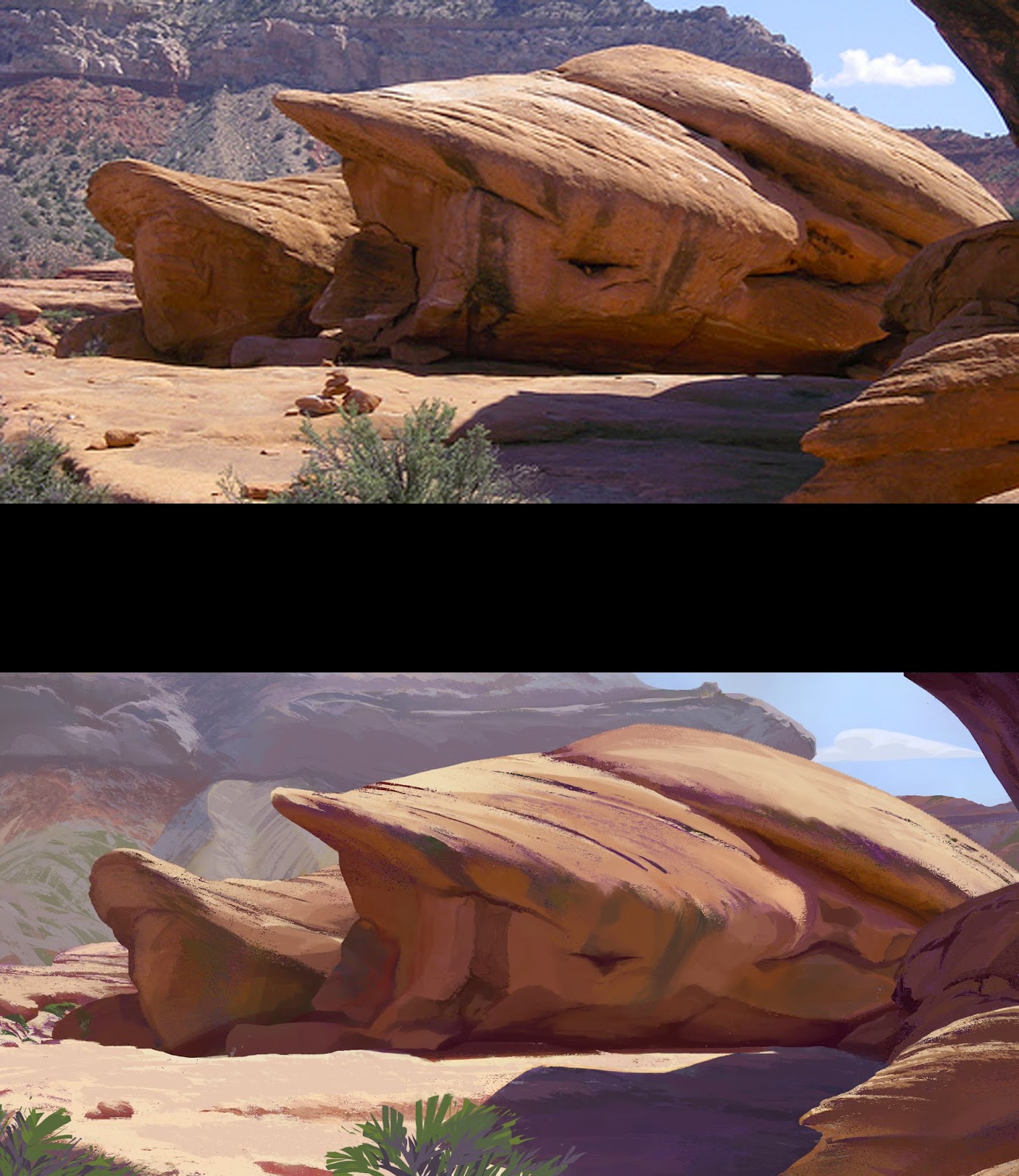 Posted by iLLiVate at 7:16 PM No comments: